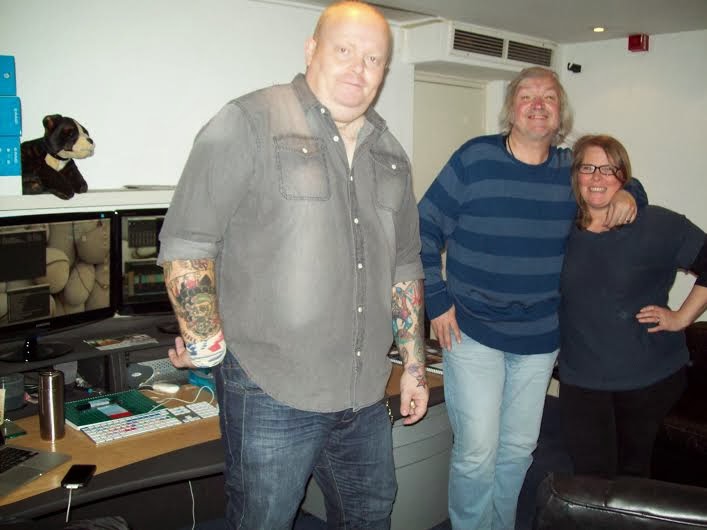 Editing Studio, Central London, January 2014 - Keith's second big assignment of the year; Chief Archive Researcher on the Official KISS movie, 'You Wanted The Best, You Got The Best'. Here he is pictured with a part of its team; Director, Alan G. Parker and Editor, Ceres Doyle. Image taken by its Producer, Alexa Morris.
Posted by A-M at 05:38

(29) Canada – Still hanging in there. The upcoming Marilyn paperback (set for release in America / Canada in just two weeks time) was to be found at #3 in the “Biographies & Memoirs > People, A-Z > ( M ) > Monroe, Marilyn” section on Amazon Canada. It meant that it had been placed in those listing for almost 24 straight-weeks!!

(22) UK – The fiftieth anniversary of JFK’s tragic assassination and Keith was to be found discussing the tragic event and in particular his supposed relationship with actress, Marilyn Monroe on two BBC Radio shows.

- It’s announced that Good Ol’ Freda, the movie based on the life of The Beatles’ Fan Club secretary, Freda Kelly, on which Keith was the archive consultant, will be screened on More4 in the UK and Europe on December 10.

(19) Canada - The upcoming Marilyn paperback (set for release in America/ Canada on December 10) was to be found at the lofty #3 position in the Amazon Hot New, “best-selling new and future releases” in biographies section on Amazon Canada, and thus marked an uninterrupted 22-week in the Top 5, 10 or 20 charts on the site.

(16) Leafy Berkshire – That time again; a return appearance to John Barratt’s bistro. Chicken Curry (amongst the finest you could eat) was served and accompanied the fine conversation quite delightfully. (“Thanks, John, mate!”)

(13) Leafy Berkshire – Another massive, exceptionally busy day of phone calls, emails, researching and typing, the latter two for the new, upcoming, still secretive Beatles project. Time was also spent today confirming to the newspaper, The Liverpool Echo Marilyn Monroe never once paid a visit to the city of Liverpool during her visit to our shores in 1956. (Thanks Anne Marie for the tip-off!)

(12) Leafy Berkshire – A busy day preparing and sending-out treatments of the Marilyn TV/movie idea, to contacts made at the Factual Televisual Festival the previous week…”nothing ventured, nothing gained, aye?”

(11) Canada - The upcoming Marilyn softback (set for release on December 10) was to be found at #8 in the Amazon Hot New, “best-selling new and future releases” in biographies section on Amazon Canada, and thus marked an uninterrupted 21-week in the Top 5, 10 or 20 charts on the site.

(6 & 7) London, West End – Return appearance to the BAFTAs. Keith, as a guest of NBC America, was in attendance at the sold-out, prestigious, media, two-day, Factual Televisual Festival. A highly enjoyable time was had by all; after which, our Mr Badman hastily jumped onto the train (in true Beatlemania style) for an excursion to “Peter Lawford-land” to tie-up some loose-ends.

(4) Canada – The softback of Marilyn was at #8 in the Amazon Hot New, “best-selling new and future releases” in biographies section on Amazon Canada, and thus marked an uninterrupted 20-week, fifth-straight month run in either the Top 10 or 20 charts on the site. While it was also to be found – for the very first time - at #2 in the “Hot New Releases in People (( M ))” and at #5 in the “Best Sellers in Monroe, Marilyn” sections of the site.

(1) Canada - What a cracking start to the Month! Despite the fact it’s not set to be released for another 6 weeks, the softback edition of Keith’s Marilyn raced back to the #1 position in the “Biographies & Memoirs > People, A-Z > ( M ) > Monroe, Marilyn” section on Amazon Canada.