September 2008 Research on Keith's Marilyn project rolls on. Clearing up 46 years of unfair bull**** about the great lady has proved to be one most enjoyable task. Amazing to think that so much of what we believe about the actress's final months never actually happened! (The release date of the book, 'Marilyn Monroe: Her Final Months, As It Was, As It Happened' is still set for November 09.) Thanks to everyone who remarked how much they enjoyed Keith's video show at the Liverpool Beatles Convention last month. The worldwide premiere screening of the new 'Magical Mystery Tour Memories' documentary was well-received also. Great seeing so many old friends and, of course, Keith's wonderful web-mistress, Anne Marie. Fancy reading about The Clash's 1979 appearance on the classic ITV pop show, Alright Now or Ringo's brief slot on a 1970 edition of Frost On Sunday, then check out the latest editions of Record Collector. July 2008Latest update from Keith - "My highly exhaustive Marilyn Monroe research rolls. Amazing to think that, 46 years after her death there is still new info about her waiting to be uncovered! Special thanks this month goes to Bob Boyer, who has been another star for me on the project out in America. His input and help is greatly appreciated. 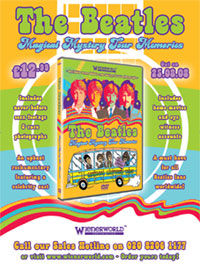 click the graphic above for bigger image
The television / DVD documentary, The Beatles - Magical Mystery Tour Memories, on which Keith was a consultant is going to be screened in by him in Liverpool next month at the massive 6-day Beatles Convention. Special guests should be in attendance at the showing. Watch this space."

"Marilyn Monroe: Her Final Months, As It Was; As It Happened"
Keith is very pleased to announce that he has signed a deal with JR Books to publish the aforementioned title. A release date has been set for Autumn 2009. Keith would also like to thank his new agent, Robert Kirby at United Agents for handling the deal. May/June 2008New Book Update: Keith's highly exhaustive Marilyn Monroe research is progessing wonderfully. Special thanks this time must go to Mitch Ison for handling one aspect of the research out in the States. He really cannot be thanked enough. Watch this space for more news on the project, which is set to appear in late 2009. Record Collector articles continue to come. Catch the latest issues for in-depth pieces of Burt Bacharach's 1965 Granada TV special and the 1972 London Weekend Television series Two Gs And The Pop People. Thanks to John Nolan and Richard Higgins at ITN Source for their invaluable help with these. Concerts that Keith has been seen at recently include The Zombies, Yardbirds, Chas & Dave and Buzzcock Steve Diggle. The latter is a true star! Catch his show if you can. You won't be disappointed. Keep a look out for the documentary, Beatles Magical Mystery Memories. Keith has seen an incomplete 34-minute edit of the show and it looks absolutely superb! March 2008 "Extensive Marilyn Monroe research continues: Keith would like to once again thank the wonderful staffs at the Colindale Newspaper Library, the British Film Institute, the BBC Written Archives Centre and The Washington Post for assisting him with his project. Many thanks to you all." "Keith's archive TV examinations continue in Record Collector. His piece on the 70s television favourite Lift Off With Ayshea features in the current edition. Thanks to everyone who replied to my request for current information about the show's host, Ayshea Brough." "Keith was a guest contributor on several radio stations on Monday (March 17). Beatles expert, Mr. Badman was on hand to give his view on Sir Paul McCartney's rather messy divorce from Miss Mills." January 2008Keith would like to wish all the visitors to this site all the very best for 2008!Keith has been a consultant on a new and rather exciting unofficial documentary about Magical Mystery Tour. This is going to be rather special so watch this space for further news and check out the website here! Thanks for everyone who sent in information re the current activities of 1970s TV host / star and singer, Ayshea Brough. Record Collector update: Keith's examination of the footage taken at the 1968 Melody Maker Awards and the Lulu According To Freud ITV special from that same year are featured in the issues dated February and March respectively. And thanks very much indeed to this individual who thinks that the words of Keith Badman are worthy enough of a page here! The individual clearly has taste!
Posted by A-M at 15:27