December 2010Further accolades for Keith's book came when the Daily Express columnists, Jane Clinton and Graham Ball choose (on the 19th) the publication as one of their, "Best Of The Lot", celebrity book gift choices for Christmas. In a piece entitled, "Stuck For A Present? Just Follow That Star," Keith's book was selected alongside works by showbiz luminaries such as Michael Parkinson, Joanna Lumley, Maureen Lipman and Michael Caine. What an absolute, absolute honour! Keith promoted the book further when he was a guest on two BBC Radio shows this month; BBC Radio Kent's highly-respected, Sunday Supplement show (on the 12th) and the highly-popular Sue Marchant Show (during the evening of 14th) Campaigns for the book continued when Keith's interview with Spencer Peet for the Rod Serling Foundation was published at the end of this month On December 8th, the 30th anniversary of John Lennon's tragic passing, Keith was a guest on the live, American, one-hour, NPR Radio, Lennon tribute show, On Point. Appearing alongside him on the programme was Alan Light, one of Rolling Stone's premiere music critics. Away from the media, Keith was out and about in December, seen at the Arsenal vs. Partisan Belgrade, Champions League game at the Emirates (on the 4th - Thanks Laurence!) and at Paul McCartney's Christmas concert at the HMV Apollo in Hammersmith (on the 18th - Thanks Steve!). Plug time: Want to watch one of the funniest, best-written, best-produced comedies on TV in years (well, since Curb anyway)? Check out the rather lovely, Patricia Heaton in The Middle. (You can catch it on ABC TV in America and Sky Television in Europe.) Just wonderful! October / November 2010 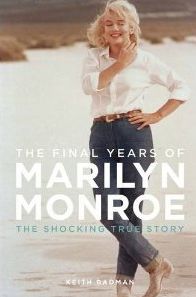 Recent reviews and plugs for the book have included (in the press):
The Lancashire Evening Post
The Daily Express (05/10/2010 and subsequently syndicated across the world)

Keith's regular, archive music series in the wonderful Record Collector magazine, Rockin' The Box, have also continued. These have included lengthy pieces on John Lennon's last-ever on-stage performance in 1975 (November edition), the 1977 Daily Mirror Rock & Pop Awards concert (December) and The Hollies' recording 'On A Carousel' for Granada Television back in 1967 (Christmas edition).

Plug time:
Once again, our Mr Badman is not one to endorse products but one recent release has caught his attention. Released by MVD Visual, the strange DVD, Paul McCartney Really Is Dead: The Last Testament Of George Harrison, will certainly provide both fans and critics alike with plenty of food for thought.
August / September 2010The Final Years Of Marilyn Monroe - The Shocking True Story hits the stores in the UK/ Europe/Canada/Japan on Saturday, September 25. The Australia/ New Zealand release date has, however been shifted back to October 15. Advance sales of Keith's book are still going well: No.3 - in 'Hot Future Releases' in the Actors & Actresses chart on Amazon.co.uk (September 20 - the legendary Michael Caine was No.2, Dannii Minogue No.1)No.12 - in the 'Biographies, Music, Stage & Screen' chart on Amazon.co.uk (September 18)No.3 - in the English lanquage, 'Biographies, Memoirs, Entertainers' chart on Amazon France (September 16)No.10 - in the 'Biographies, Memoirs' chart on Amazon Canada (September 3) Noteworthy promotional interviews for the book have, so far included: The Tommy Schnurmacher Show (CJAD 800 Radio in Montreal, Canada - August 5)London Grip (interview with Helen Donlan - September 8)The Maurice Boland Show (Talk Radio Europe - September 23) Keith's piece on John Lennon's last-ever, on-stage performance will be in the next edition of Record Collector magazine (October) He wishes to thank everyone who has written to him saying how much he enjoyed his video show at the Liverpool Beatles Convention in August. (A big thumbs-up must also go to Cavern City Tours for wonderfully putting it all together.) July 2010

Advance sales of Keith's book, 'The Final Years Of Marilyn Monroe' are going well and chart positions have already been gained! So far, these have included:

Thanks to everyone who has purchased Keith's book in advance. He hopes it lives up to the expectations.
April / May / June 2010

The countdown to the release of Keith's long-mooted tribute book to Marilyn Monroe has well and truly begun. Here's the first glimpse of the cover....Five years in the making and now sporting yet another new title, the book, The Final Years Of Marilyn Monroe: The Amazing True Story, is all set to appear across the globe on Saturday, September 25. Pre-orders can be made at all outlets of Amazon, including Amazon.co.ukAmazon.com Amazon.fr as well as at Tesco.com.
On Friday, April 29, Keith was seen at the V & A Museum in London, at the launch of the superb new Harry Goodwin / Top Of The Pops pictures exhibition and book. He was seen rubbing shoulders with the likes of Paul Gambaccini, Mike McCartney, Sir Jimmy Savile, Steve Ellis (Love Affair) and four former members of Pan's People. (He hasn't recovered yet!)Keith's monthly ITN Source series in Record Collector, Rockin; The Box, rolled on with a look back at The Smiths' 1987 South Bank Show special and some classic Jazz programmes, including Ella Fitgerald and (in the current, July edition) Count BasieHe was also recently asked, by the show's researchers, to vote on the recent Channel 4 programme, The 50 Greatest Videos Of All time (transmitted Saturday, May 15)January / February 2010Major News! Research on Keith's Marilyn Monroe book has finally come to an end. After five-years of extensive work, the very last full-stop on this ground-breaking assignment has been typed. Now sporting an alternate title of "Marilyn Monroe: Her Final Years, As It Was, As It Happened," it is expected to hit the shops in August 2010. The publisher is JR Books. Keith would like to thank every single one of you who has assisted him along the way. More news on this most exciting project shortly. Expect to see the front-cover soon. Articles News! Keith's pieces about Pink Floyd's lost 1967 appearance on TOTP and Oasis's slot on the 1984 television show, With... appear in the current issue of Record Collector magazine. Keith in the media! Quotes by him about The Rolling Stones legend, Ronnie Wood appeared in The Daily Express newspaper on Thursday, January 14 and remarks about the possible closure of Abbey Road Studios were heard on a few local BBC radio studios during the day of Tuesday, February 16. Very special thanks to Mod-legend, author, friend, Terry Rawlings, DJ, Mod-sage, record-label boss, Eddie Pillar and David and Paul of Izon Audio Visuals, for a most enjoyable evening later that day. It was for the shooting of an exciting new film. More news on this shortly. Oh, by the way, big thanks to Mick Avory of The Kinks, who was there too. He's still a thoroughly decent chap! My conversations with him are always most enthralling. Our Mr. Badman is not the one to endorse products but sometimes there is an exception. The new John Lennon DVD, Rare & Unseen is one. Released by Weinerworld Ltd., the 75-minute documentary contains many rare clips of the great man, including, for the first time on DVD, his appearance on the 1972 ITV show, Aquarius and interview on LWT's Weekend World from the following year. Really superb stuff and a must for all Lennon buffs!
Posted by A-M at 15:29